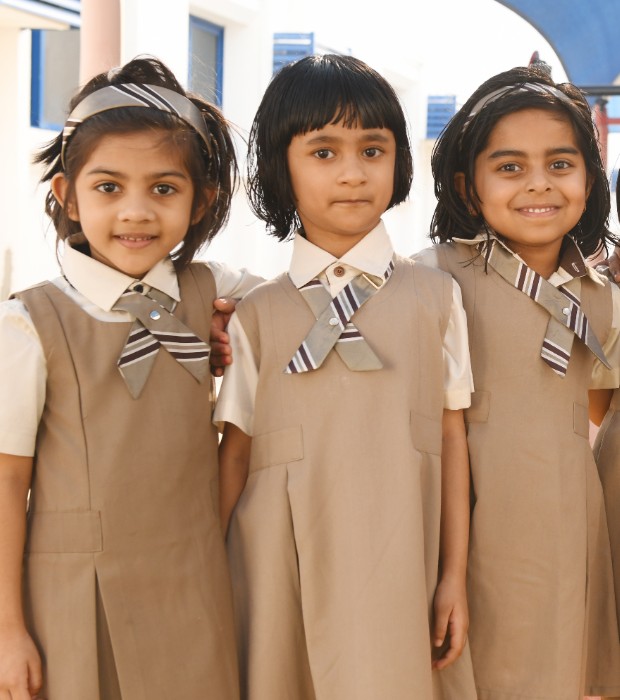 It is mandatory to submit the following documents for admission:

For students coming from India: Transfer Certificate and Results issued   abroad (outside the UAE) must be attested by the District Education Officer in India, or relevant authority; Indian Consulate in Dubai and the Ministry of Foreign Affairs, Sharjah. KG1 , KG2 & Grade 1 new admissions are required to submit the same if admitted after 31st of May.

For students coming from Gulf countries other than the UAE: The Transfer Certificate and Result should be attested by the Ministry of Education of that country,  its  embassy in the UAE and Ministry of Foreign Affairs Sharjah.

Students coming from within the UAE: Are required to submit the original Transfer Certificate / School Leaving Certificate(Arabic) of the school last attended, duly attested by the Ministry of Education and the Result of the previous Grade.

Direct admissions to Grades X & XII will not be given. Admissions are subject to availability of seats and the screening conducted in the school.

NOTE: The Principal reserves the right to refuse admission to any student whose character and conduct or academic performance is not satisfactory.

Withdrawal: The Transfer Certificate (T.C.) application form is available online. Parents may log in to GEMS Parent Portal the username and password provided to them by the school and apply for T.C.

Parents are requested to collect the Medical Record of their ward from the Medical Room after collecting the T.C

AS PER MINISTRY OF EDUCATION SHARJAH:

Students will be granted leave only if they fulfill the following criteria:

Illness that is documented by a doctor’s report certified by official medical authorities.

Travel outside the UAE for the purpose of accompanying a relative of first degree relation during medical treatment under condition of proof (via an official accredited certificate) a period not exceeding one month during the academic year, extendable through permission of the director of the educational zone or authorized educational authority. Evidence of being outside the country must be testified by the UAE’s embassy in that country.

Death of a relative (of first and second degree relation) for a maximum period of three days.

Absence for a period of a day or two consecutive days up to a maximum of five days during an academic year for reasons accepted by the school administration.

Students can be suspended from school in case of: Unexcused absence exceeding ten consecutive days or fifteen in consecutive days during the academic year. Prior to expulsion the student must receive three official warnings at a rate of one warning for each three days of absence.